DYM survey: 63% of Spaniards believe that there was widespread corruption in the purchase of health material due to the pandemic.

Inicio / News / DYM survey: 63% of Spaniards believe that there was widespread corruption in the purchase of health material due to the pandemic.

More than six out of ten Spaniards consider that corruption in the purchases of health materials required by the coronavirus pandemic (masks, respirators, etc.) by the public administration was widespread, according to the latest survey by DYM for 20minutos. Moreover, almost half believe that both the administrations governed by the PSOE and the PP were equally involved.

Almost one out of three citizens believe that corruption only affected some punctual purchases, being the voters of Unidas Podemos the ones who most advocate this idea. Vox supporters are the most critical in this sense and only 18% consider that irregularities only occurred during the crisis in very specific cases. In fact, it is the voters of Santiago Abascal’s party who think to a greater extent (77.2%) that corruption was widespread, followed by those who in 2019 voted for Ciudadanos (62.6%), and PP voters (62.5%).

Perception changes according to ideology

Similar responses to Abascal’s supporters, who also point to a greater extent to an irregular purchase of sanitary material by the socialists (41.8% believe so), and barely 2.5% think that the PP were not completely transparent in such procedures. More than half accuse the public administrations of the two formations.

With the supporters of left-wing formations the same thing happens, but with the opposite tendency: they believe that the party they voted for is not involved in corruption (around 10%) and accuse the PP governments of it (47% of the socialist voters and 54% of those of Unidas Podemos). 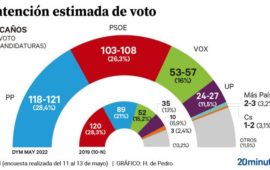